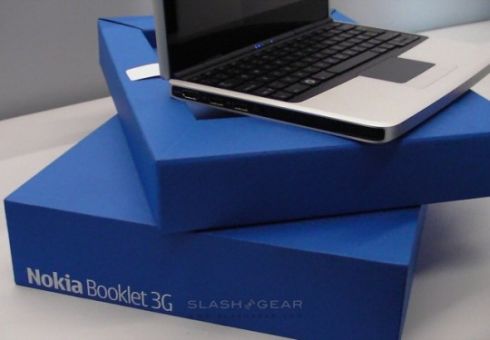 The Nokia Booklet 3G isn’t shipping anywhere yet, but the folks at SlashGear got a chance to check out the retail packaging today. And it’s blue. Yeah, I know, the box isn’t as exciting as photos of the thin and light mini-laptop itself. But SlashGear has those too.

In other news, Gizmodo has confirmed that the Booklet 3G will be available in the US… at some point. It’s not clear if the laptop will be available unlocked, or if you’ll have to buy it from a wireless carrier. And that means there’s no way to know at the moment whether it’ll actually cost over $800 or if it will only be available in the US at a subsidized price. My money is on the latter, although it sounds like there’s a good chance you’ll be able to pick up an unlocked version in Europe if you’re willing to shell out €575 for it.

It’s also unclear whether the laptop will be available in the US before the end of 2009. But a Nokia official has confirmed that it will sold in the US at some point or other. Yeah, almost makes the box pictures look exciting, doesn’t it?

3 replies on “Nokia Booklet 3G unboxed, coming to the US… eventually”