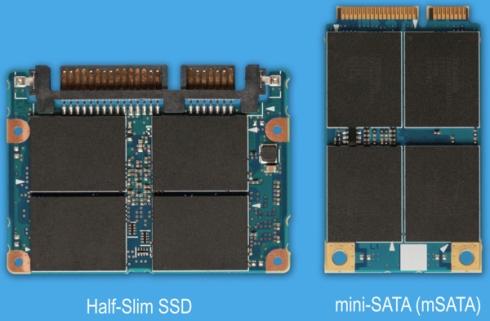 Companies like RunCore, Active Media, and Super Talent that put out SSD upgrades for netbooks have to deal with a series of different connectors, which means that an SSD upgrade that works with an Asus Eee PC might not work with a Dell Inspiron Mini or HP Mini netbook. But it looks like that could change soon.

The SATA International Organization is expected to launch a new standard for laptop and netbook makers at the Intel Developer Forum in San Fransisco today.

The new standard will be called mini-SATA or mSATA and it uses the same Mini PCI Express connector as many existing PCIe SSDs. The standard is expected to be used for 64GB and smaller SSDs. Higher capacity SSDs can be designed to be the size of 1.8 inch or 2.5 inch hard drives.

The mSATA standard allows for transfer rates up to 3Gb/s. Dell, HP, Lenovo, Samsung, Toshiba, and STEC are already backing the standard, which is kind of important if it’s actually going to become, you know, a standard. Toshiba is already announcing 30GB and 62GB mSATA SSDs with 180Mbps read speeds and 50Mbps write speeds.

Update: I’ve added an image of a new mSATA SSD courtesy of Engadget.

4 replies on “Netbook SSDs to get a standard connector”