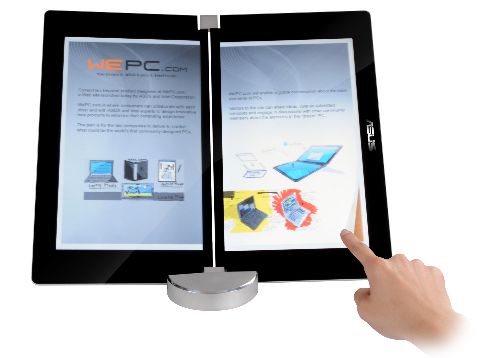 Earlier this year Asus shared a few photos of a concept notebook that would have dual screens. In laptop mode, one screen would act as a keyboard while the other would be a display. But you would also be able to use both screens to display pictures, text, graphics, or anything else you’d want to put on a screen. Of course, in March, it was just a concept. But now it looks like Asus may have figured out a practical application for this dual-screen approach: an eBook reader.

The dedicated eBook reader space is heating up. Amazon has the Kindle, Sony has a series of eReaders, and a number of other companies are entering the space. And while there’s still some question about just how much money people are willing to spend on a device that essentially lets you do something you can already do (read a book), this could be a growth area for consumer electronics. So Asus and other companies are trying to figure out how to get in on whatever action there may be while offering something a bit different.

Last month we saw reports that Asus was planning on entering the eBook reader space. Now the Times Online reports that Asus will launch a line of eBook readers before the end of the year. The goal is to offer something that’s cheaper and more versatile than existing eBook readers. According to the report, the top of the line version would have dual touchscreen displays connected by a hinge, giving the reader the feel of a paper book. You could also read a book on one screen while browsing the web on another, or use one screen as a keypad. The reader would also be in full color, unlike existing readers from Amazon and Sony.

Of course, these features make the device sound more like a laptop than an eBook reader, which makes me wonder about the price and the battery life. But Asus will also reportedly have a budget eBook reader which will have a more standard feature set and run about £100 or $164 US.

11 replies on “More details on the Asus eBook reader”