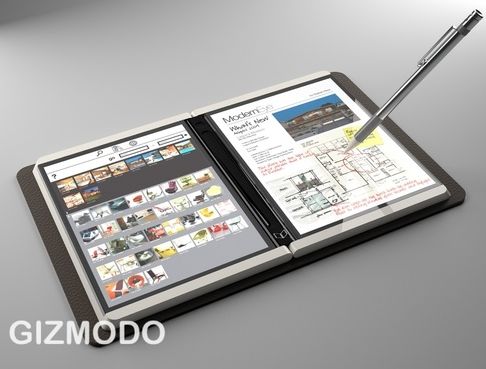 But I’m still not entirely convinced that tablets in general make a lot of sense. I mean, sure, they’re cool. But what do they really add to the computing experience? I can type 90+ words a minute, but I can barely read my own handwriting. The last thing I want to do is send an email using handwriting recognition on a touchscreen tablet, or write a blog post, leave a comment on a web site, chat over instant messenger, or do much of anything else that requires text input.

Of course, if you primarily want to use a tablet as a passive entertainment device for reading web sites, watching videos, or reading eBooks, I suppose that could work. Because reading an eBook on a laptop is kind of a painful experience.

Anyway, a few years back Bill Gates and Microsoft talked about tablets as if they were the future of computing and that soon every laptop would have a touchscreen that could fold down over the keyboard for use in tablet mode. As you’re probably aware, that didn’t happen. But a lot of companies are thinking there’s a new use for touchscreen computers: secondary or tertiary devices. Rather than slapping a touchscreen into a typical laptop and driving up the price, they’re creating standalone tablets without keyboards. Some are considered Mobile Internet Devices, or MIDs. These typically have 7 inch or smaller displays and as the name implies, they’re designed for interacting with the internet. Others are basically souped up eBook readers like the latest from Sony.

But the most excitement has been reserved for high concept devices like the upcoming CrunchPad or the rumored Apple Tablet. One company I didn’t expect to see making a big splash was Microsoft. But now Gizmodo has snagged some concept photos of an upcoming device called the Microsoft Courier, a dual-screen touchscreen device that can be operating with a stylus or finger, and which supports multitouch gestures like pinching to zoom.

The demo video makes the device, which has two 7 inch “or so” displays look kind of like a next-generation PDA with a heavy reliance on web connectivity. It’s likely that you could use it for more. After all, it does appear to have a fully functional web browser. But I’m not convinced that the tablet form factor makes sense for a more powerful computer, so if and when Microsoft brings the Courier to market, I kind of hope it’s a low power device with a price tag of $400 or less.

But while Microsoft Courier is new and innovative, it’s important to remember it’s not the only game in town. Here are just a few of the other tablets and MIDs announced within the last 24 hours:

So what do you think? Do you want a touchscreen tablet internet device? How much would you be willing to pay for one?

9 replies on “Microsoft, dozens of others trying to revive the tablet PC concept”