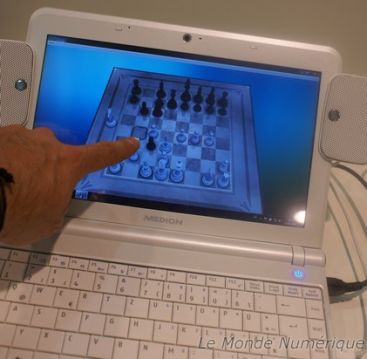 European computer vendor Medion has a long history of offering rebranded versions of MSI netbooks under its own name. And by long history, I mean, they’ve been doing it for the year and a half or so that MSI has been making netbooks in the first place. The nice thing is that sometimes the Medion versions are cheaper and/or have more features than the original models. Case in point: the Medion Akoya Mini 1315.

This little laptop appears to be virtually identical to the MSI Wind U210 in most respects. They both have AMD Neo processors, ATI Radeon Xpress 1250 graphics, and 2GB of RAM. But the Medion Akoya Mini 1315 also has a touchscreen display. According to the reports I’ve seen, the Medion version has an 11.6 inch display, while I’m pretty sure the Wind U210 has a 12.1 inch screen. It’s not clear whether the difference is due to the touchscreen or if someone got the specs wrong.

Medion also sells an Akoya Mini 1313 laptop which is basically the same machine without the touchscreen display. The Akoya Mini 1315 should be available by the end of the year and it’s expected to sell for about 600 Euros ($859 US).

4 replies on “Medion rebrands the MSI Wind U210, slaps on a touchscreen for good measure”