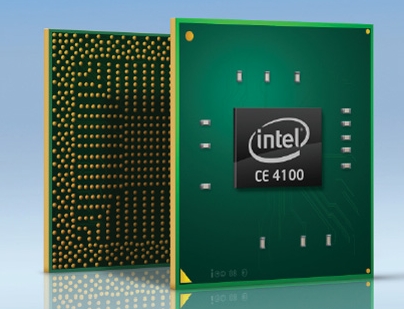 Intel’s new CE4100 is a system-on-a-chip with a processor and graphics controller on a single chip built using a 45nm process. Oh yeah, and it’s built on the low power Atom processor core.

The CE4100 is meant for set top boxes like cable boxes and Blu-ray players, not laptops. But it runs at clock speeds up to 1.2GHz and has FSB speeds of 200MHz to 400MHz while supporting playback of 2 simultaneous 1080p video streams. It can support H.264 video playback, 3D graphics, and streaming media in Flash 10 format. All this, whle using just 7 to 9 watts.

It sounds like most of the work is going to be handled by the graphics controller not the processor, so I can’t say what kind of performance you would get if you tried loading a desktop operating system like Windows 7 on a system with the CE4100 chip. But I’m kind of drooling over this one and wishing Intel would release it for netbooks and nettops. Or at least incorporate the same graphics capabilities into the upcoming Atom processors that are meant for laptop and desktop computers.