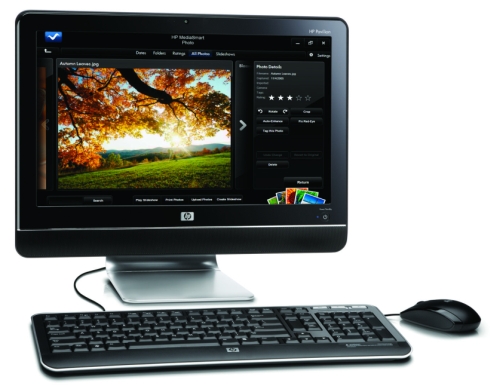 At $599, the new HP MS200 is the cheapest all-in-one PC in HP’s arsenal. It packs an 18.5 inch display, but unlike HP’s TouchSmart all-in-ones, this model doesn’t have t touchscreen. What it does have that sets it apart from low cost all-in-one machines from Asus, MSI, Shuttle, and other companies is a dual core 1.5GHz AMD Athlon X2 3250e processor and ATI Radeon HD 3200 graphics with 256MB of memory.

That CPU and graphics chipset don’t exactly make the MS200 a bleeding edge machine, but it’s certainly a step up from a the horde of all-in-ones that basically pack cheap, low power netbook parts behind a high resolution display. I won’t be able to say for certain until I have a chance to test this system, but I would imagine that the HP MS200 might be able to handle tasks that make cheaper all-in-ones choke, including high quality Flash video playback in fullscreen mode.

Of course, the HP MS200 isn’t a netbook, or a notebook, or ultraportable. And it doesn’t feature netbook-like components. So why am I covering it here? Two reasons. First, because HP announced it this morning and I think it’s pretty cool. And because it’s yet another example of the impact that netbooks and related technologies have had on the computer industry as a whole.

Computer makers are realizing that not every new machine needs to have the latest, greatest, fastest, and most expensive components. And so while all-in-one computers of yesteryear typically ran $1000 or more, you can now pick one up for between $400 and $600, including this machine which should offer significantly better performance than some of the cheaper models on the market today.

You can find more pictures of the HP MS200 after the break.