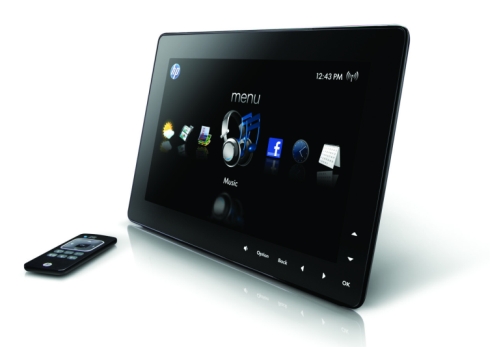 You know how Apple’s answer to the netbook phenomenon is supposed to be a touchscreen, internet-connected tablet device? It’s starting to look like Apple might be the last company to introduce of those. Toshiba, TechCrunch, and now HP have all introduced relatively affordable internet tablets. Of course, the HP version looks more like a souped up digital picture frame than a portable tablet, but the new HP DreamScreen is a touchscreen tablet with a remote control that can used throughout the house to stream content from your home network, removable storage cards, or internal storage.

Both models will include WiFi, Ethernet, 2GB of built in storage and a media card reader. They feature software for watching videos and visiting web destinations including Pandora, Snapfish, and Facebook. There’s also a new HP SmartRadio feature that lets you connect to about 15,000 internet radio stations from across the globe. They can be sorted by genre or location.

There’s no mention of a battery in the spec sheet, but I can’t tell if that’s because the DreamScreen is meant to be plugged in and used at home or if the battery specs simply aren’t available yet. A peek at the back of the unit really does make me think that the DreamScreen is more of a overpowered picture frame than a portable tablet though.

, or Best Buy, and the 13 inch DreamScreen 130 is available from HP or Amazon

Update 2: Xavier from GottaBeMobile got to spend some hands-on time with a DreamScreen. You can check out the video after the break. The user interface is pretty slick. But it still comes acros as a consumer electronics device rather than a computer. In other words, I have no idea how difficult it would be to update the software unless HP sends out updates or new features.

One more update: As you can see in the video, the DreamScreen can be controlled with a remote or by hitting some buttons on the frame. The display isn’t a touchscreen.

There are also more images after the break.