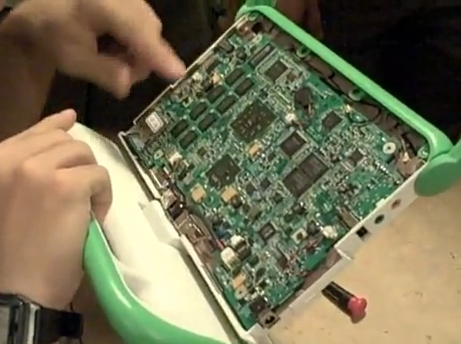 The OLPC XO Laptop 1.5 doesn’t just have a faster new processor. It has an entirely new motherboard. And OLPC volunteer Bernie Innocenti gives us a guided tour of the new mainboard in a video which you can find after the break.

The new board is exactly the same size as the motherboard found in the original XO Laptop, which means that you can take one of the new VIA motherboards and slap it in a laptop built for the original AMD CPU. But the components have been mixed up and moved around. And the power draw of the new motherboard is higher, so you would also need to upgrade the power supply.

The RAM, flash storage, BIOS, embedded controller for power managementand other featues are all soldered to the motherboard, which makes hardware hacking a little trickier than it would be with a commercially available netbook. But if there’s one thing the OLPC community has demonstrated, it’s that nothing’s impossible. You know, except for bringing the priced down to $100.

You can find the video tour of the new motherboard after the break.

7 replies on “Guided tour of the XO 1.5 Laptop motherboard – Video”