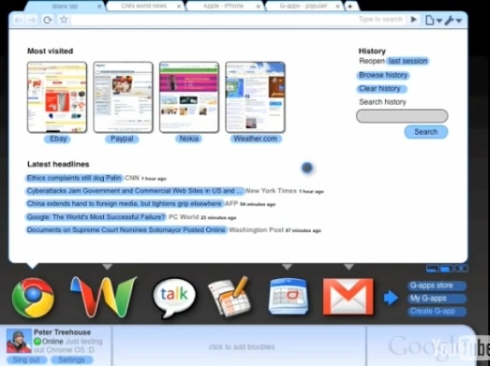 It’s no secret that Google is working on an operating system aimed at netbooks (at least initially) called Google Chrome Operating System. But while the company announced a few months ago that the OS would be available as a developer preview by the end of the year and wouldn’t actually show up on devices until 2010, there’s this magical place called China where essentially anytime something technological can happen, someone seems to think it’s a good idea to make it happen. And so I’m not entirely surprised to see Shanzai.com reporting today that industry sources in China expect devices running Chrome OS to start shipping in mid-October.

Google still hasn’t said exactly when it will release the first public alpha or beta version of its software. But an October release to steal some of the thunder of Windows 7 isn’t entirely out of the question. And while Google may not really expect big name computer makers to start selling devices with the OS in the West until it’s been thoroughly tested, I could see some Chinese manufacturers slapping a pre-release version of the operating system on some cheap hardware and shipping it right away.

In related news, Shanzai.com suggests that Chrome OS could be installed on computers with the Loongson 2F processor. You don’t hear much about the Loongson CPU in the West. It powers the Emtec Gdium Liberty netbook. The MIPS-based processor was developed by China’s Academy of Sciences and also shows up in some Chinese products. Since it’s not an x86 processor it can’t run Windows and sort of winds up in the same camp as ARM-based processors that have to run Linux or alternate operating systems, which could make Google Chrome attractive. It’s not clear whether Google plans to release a MIPS port of the operating system, but we already know that it’s designed to run on x86 and ARM devices and even if Google doesn’t release a MIPS version I wouldn’t be surprised to see a third party develop a port.

14 replies on “Google Chrome coming next month? And to Loongson-powered netbooks?”