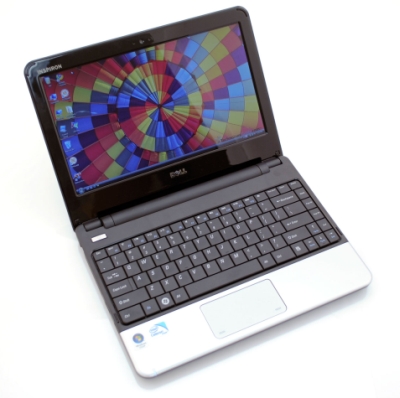 The Dell Inspiron 11z is an 11.6 inch laptop with a high resolution display, a 1.2GHz Intel Celeron 723 CULV processor, integrated x4500 graphics, and Windows Vista Home Premium. On paper it looks like it should be a lot more powerful than your typical netbook, if a tiny bit larger. Liliputing Forum member Frank Ancona picked one up recently and seems pretty happy with the size, weight, and performance. But Kevin O’Brien at Notebook Review tells another story.

In terms of design, the 11z is attractive and has a nice keyboard. In fact, it looks an awful lot like the Dell Inspiron Mini 10z, although Dell isn’t slapping the “mini” label on the 11z because the company wants to differentiate this laptop from its netbooks. The primary difference is the larger, crisper, 1366 x 768 pixel display.

But Kevin hated the touchpad with a passion. Like the Mini 10v, the Inspiron Mini 11z has the left and right buttons built into the touchpad itself. In other words, you have to actually push down on the touchpad to click. The problem is that if you have two fingers on the touchpad (one to move the cursor, the other to click a button), you’re going to have a tough time accomplishing either goal.

In terms of performance, the Inspiron Mini 11z does well with graphics heavy tasks, but not so well with CPU intensive jobs. Unfortunately, some graphics jobs are CPU-heavy tasks, such as watching HD flash video. Kevin reports that HD video from sites like YouTube was laggy. And there were also problems playing standard definition video from Hulu. In a CPU-only benchmark, the Inspiron 11z actually scored lower than a number of Intel Atom powered netbooks, while overall performance in PCMark05 was a bit higher than your typical netbook thanks to the higher performance graphics processor. 3D graphics performance was far better than that on a typical netbook.

I don’t happen to have a Dell Inspiron 11z handy, but I am testing an Acer Aspire 1410 this week. I tried to run the same PCMark05 and wPrime benchmarks to see how the Acer laptop with a 1.4GHz Intel Core 2 Solo CULV processor and GMA 4500 graphics stacked up against the Dell. For some reason I couldn’t get PCMark05 to show me any scores at all, but wPrime gave me a score of 112 in Windows Vista. That’s slightly better than the scores Kevin posted for several Intel Atom N280-based netbooks running Windows XP, but not much.

All told, it sounds like the Dell Inspiron 11z might be a good option if you’re looking for a machine that can handle HD video playback from the hard drive, or some video games. Like the Acer Aspire 1410, it’s not necessarily the best option if you plan to watch a lot of HD Flash video. But with both the Acer 1410 and the Inspiron 11z going for about $450, the Acer laptop seems like a better deal since it comes with a better touchpad and a higher capacity, 6 cell battery.