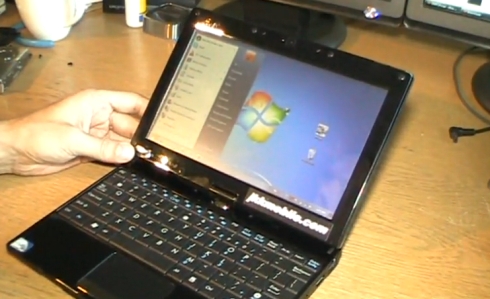 Windows 7 won’t be officially launched until October 22nd, but Microsoft has been making beta and release candidate versions available for months. So while it’ll be another month or two before we start to see netbook makers launching touchscreen laptops preloaded with Windows 7, it’s a bit surprising that I haven’t seen a detailed video of Windows 7 on the Asus Eee PC T91 touchscreen tablet… until today.

Netbook hacker extraordinaire jkkmobile has posted an extensive video (we’re talking nearly 30 minutes here), showing Windows 7 on the Eee PC T91. And it looks pretty good. In fact, in a lot of ways, Windows 7 seems to be a much better operating system for this netbook than Windows XP. Windows 7 includes a number of touch-friendly features, and jkkmobile found that, among other things:

It’s worth noting that the Eee PC T91 doesn’t currently support multitouch gestures, so it won’t be able to take advantage of all the touchscreen features included in Windows 7. But it’s possible that Asus will release an updated model with a multitouch display after Windows 7 is launched next month.