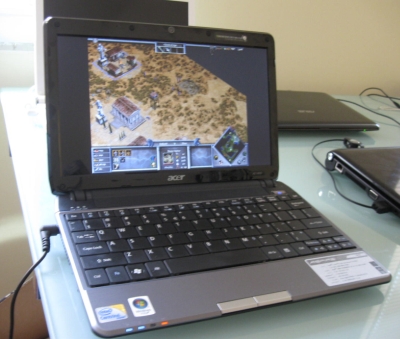 The Asus Eee PC 1101HA and Acer Aspire 1410 are about the same size and weight. And both computers feature 11.6 inch, 1366 x 768 pixel displays. The Asus laptop has an Intel Atom Z520 processor and integrated GMA 500 graphics while the Acer laptop has an Intel Core 2 Solo SU3500 CPU and integrated GMA 4500 graphics. Both are capable of handling local 1080p video playback, but both struggle with high quality Flash video (because Adobe Flash isn’t designed to take advantage of either computer’s graphics processor).

The high resolution displays and HD-ready graphics make these machines better multimedia workhorses than your typical netbook. But does that stop at pictures and video or can you do a bit more, like playing video games on these portable computers?

Well, as it turns out, I’m not much of a gamer. I looked through my stack of old school games and couldn’t find anything truly bleeding edge to test these netbooks with. The last game I purchased was Age of Mythology, a real-time strategy game from 2002 (which is still available for $10 from Amazon

). But as luck would have it, this game turned out to be perfect for testing the gaming capabilities of these laptops.

I installed Age of Mythology on 4 different laptops. The first two were netbooks with 1.6GHz Intel Atom N270 processors, integrated GMA 950 graphics, and 10 inch, 1024 x 600 pixel displays. While I was able to install the game on these systems, it crashed every time I tried to play the game. Update: As pointed out in the comments, the problem is the low screen resolution on these machines. If you install the game in safe mode and configure it to play at 800 x 600 pixel resolution, you should be good to go, and it actually runs smoother than on the Eee PC 1101HA.

Both the Acer Aspire 1410 and the Asus Eee PC 1101HA were able to play the game, but even with the graphics set to the lowest settings (640 x 480 pixels and low graphic detail), the game was sluggish and the framerate choppy on the Eee PC 1101HA. The Acer Aspire 1410, on the other hand, was more than capable of handling the game. And as a result I’ve spent way too many hours over the last day and a half conquering invading armies.

You can check out videos of each laptop playing Age of Mythology after the break.