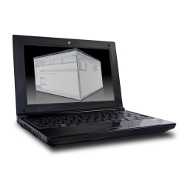 As promised, Linux PC retailer ZaReason has added a 10 inch netbook to its lineup. At first glance, the Terra A20 looks like a pretty standard netbook. But because it ships with Linux instead of Windows XP, ZaReason can offer customers a few configuration options you wouldn’t normally have.

You can also pick up a spare battery for $39, and choose between Ubuntu 9.04, Kubuntu 9.04, and Edubuntu 9.04. You can also choose to purchase the netbook with no operating system installed, but the price remains the same. The Terra A20 comes in two colors: black and mocha.

The Terra A20 isn’t the only netbook available from a Linux system builder. System76 also sells the Starling Netbook for $359. But System76 doesn’t offer nearly as many configuration options as ZaReason.

via Works With U

One reply on “ZaReason launches Terra A20 Linux netbook”