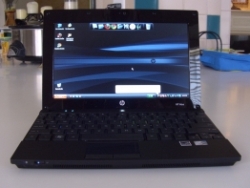 Almost every netbook on the market today that has a hard drive ships with a 5400rpm HDD. A few have slower 4200rpm hard drives. And a very few have faster 7200rpm disks. Probably the most highly visible netbook to include a 7200rpm hard drive is the HP Mini 5101, because it ships standard with that feature. If you’re willing to shell out some extra money you can also upgrade to a high performance solid state disk.

I’ve only spent a few minutes with the HP Mini 5101, so I didn’t really have a chance to kick the tires and see what kind of difference the speedier hard drive makes. But James Kendrick at jkOnTheRun has been using one for a few weeks, and he notes that the 7200rpm hard drive appears to make a pretty big difference in everyday performance.

We’re not talking benchmarks here. What we’re talking about is the way the netbook feels. And James says that’s because most netbooks ship with the same stats. The HP has an Intel Atom N280 CPU, which is a bit faster than the N270 used in many netbooks, but that doesn’t make it unique. The hard drive really does set it apart though, and James says applications just seem a bit more responsive because of it.

Do you have any experience with a 7200rpm HDD-equipped netbook? Let us know in the comments.