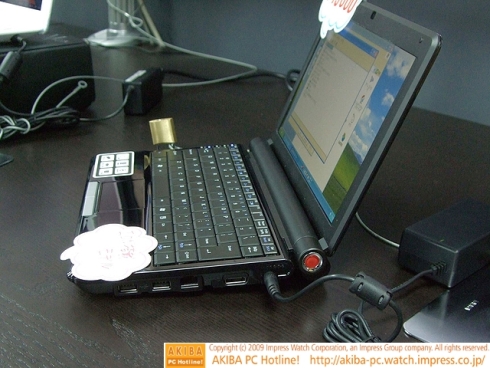 While dual core Intel Atom 330 processors have been making the rounds in low power nettops and other desktop computers for a while, you don’t see them very often in netbooks. And while a glance at a Japanese placard for the Shenzhen Weibu N10A made it look like this might be one of the first netbooks to sport both a dual core Atom 330 CPU and NVIDIA ION graphics, it looks like there was a misprint.

CNET is reporting that the computer has a dual core processor, but CNET’s source for the story, Akiba Hotline says there was a mistake, and this computer has a 1.6GHz Intel Atom N270 processor.

While it would have been nice to see a dual core netbook, the Weibu N10A does have NVIDIA GeForce 9400M graphics, which should help the little guy outperform most netbooks with integrated graphics when it comes to gaming and playing HD video. The N10A also has 1GB of RAM, a 150GB hard drive, 802.11b/g WiFi and an HDMI output.

As you could probably guess by the netbook’s brand name, I don’t expect to see this model released in the US anytime soon. But it’s also possible that a Western PC distributor could pick up the N10A and rebrand it for sale in the US or Europe.