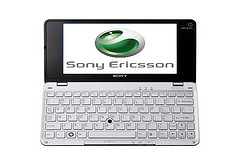 Word on the street is that we could see  a new entry in the Smartbook space from Sony Ericsson. And when I say “street,” I mean Netbook News, which heard a rumor from a “reliable Taiwanese source.”

Of course, Sony already has a few entries in the mini-laptop space. The company’s Vaio P line of computers that are smaller and sleeker looking than your typical netbook. And the Sony Vaio Mini W is pretty much your typical Intel Atom-based netbook except for its higher-than-average-resolution 10 inch, 1366 x 768 pixel display.

But if the rumor is true, the new model is likely to be sold as a Sony Ericsson device, which means it will probably have built in 3G capabilities and be distributed by telecoms, who would likely bundle the device with a long term service contract to help subsidize the price. Most of the so-called smartbooks introduced in the last few months have been based on ARM processors, which means they can run Linux or other operating systems including Windows CE. But you won’t be able to run Windows XP, Vista, or 7, since those operating systems are only designed to run on x86-compatible chips.

There’s no other news available about the rumored Sony Ericsson device yet, and it’s possible there’s no truth to the rumor at all. But if it is true, Sony Ericcson would be one of the biggest names to commit to the smartbook space.

4 replies on “Sony Ericsson Smartbook in the works?”