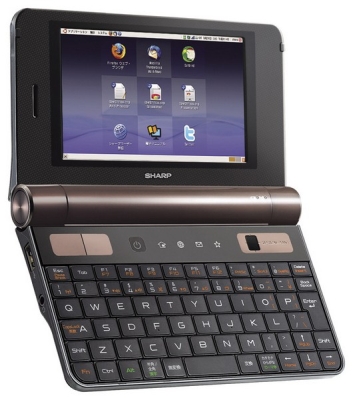 Netbooks are small laptops. But the Sharp NetWalker PC-Z1 is small even by netbook standards. It’s probably safer to call this little computer with a 5 inch display a MID or Mobile Internet Device, but unlike many MIDs, it has a full QWERTY keyboard. You’re just going to need very tiny fingers to type properly on it.

The NetWalker actually looks a lot like the UMID M1, another 5 inch mini-laptop style device. But while the UMID M1 runs Windows XP, the Sharp NetWalker features Ubuntu Linux. And that kind of makes sense if you think about it, since the last time Sharp put out a line of tiny handheld laptops they also ran Linux.

It has 2 USB ports, a microSDHC expansion slot, and 802.11b/g WiFi. The battery isn’t user removable, but Sharp says it should run for up to 10 hours at a time. And the computer reportedly launches in just 3 seconds. It will be available in Japan on September 25th for the equivalent of about $479. No word on whether this little guy will make it to the US, the company’s dual-screen Mebius netbook hasn’t made it to the West yet. But I’d be shocked if we didn’t see importers like Conics and Dynamism stock the NetWalker PC-Z1.

18 replies on “Sharp NetWalker PC-Z1: What you get when you shrink a netbook”