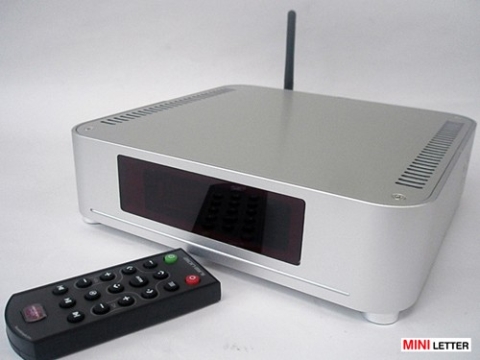 There may not be many netbooks on the market based on the NVIDIA ION platform yet, but it’s proving pretty popular with small, low power nettops (desktop PCs). Two of the latest companies to introduce nettops with dual core Intel Atom 330 processors and NVIDIA GeForce 9400M graphics are Viako and FunTwist.

Akiba PC Watch got to spend some hands=on time with the FunTwist Fiono 330, which packs HDMI, S/PDIF, and DVI outputs into a tiny package, along with 5.1 channel audio and the usual assortment of USB ports and an Ethernet jack. The machine measures just 7.6″ x 5.4″ x 2.2″ and weighs just under 2 pounds. The Fiono 330 supports up to 4GB of RAM and has a 2.5 inch hard drive. It’s also Windows 7-ready, as this model supports DirectX 10, unlike some machines that use the new NVIDIA ION LE instead of the standard ION platform.

The Viako Mini E nettop has 2GB of RAM, a 320GB hard drive, and packs a VGA port in addition to a DVI and HDMI output. This nettop also has built in WiFi as well as an Ethernet jack. It appears to come with a wireless remote control for in case you want to stick this little guy next to your TV and use it as a home theater PC.