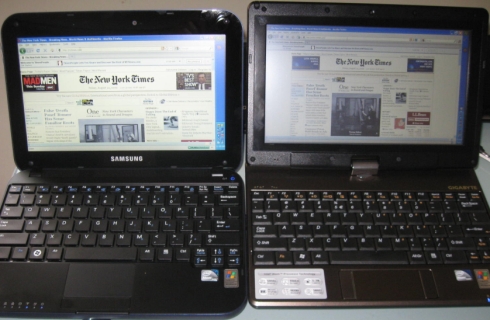 I’ve been testing out a number of netbooks over the last few days, including the Samsung Go (pictured above, left), and Gigabyte TouchNote T1028X (pictured, right). Like most 10 inch netbooks on the market today, the Samsung Go has a 1024 x 600 pixel display. The TouchNote T1028X, on the other hand, has a 1366 x 768 pixel touchscreen display. The picture above gives you a rough idea of how much more text you can fit on that higher resolution screen. But just an idea. Because I’m starting to think that no 10 inch netbook should really have a display this sharp.

The T1028X isn’t the only 10 inch netbook with a 1366 x 768 pixel display.  That resolution is sort of a magical number for many people, because it corresponds to 720p, which means HD video. The Sony Vaio Mini W comes with a similarly sharp screen, and the HP Mini 5101, Mini 1101, and Dell Inspiron Mini 10 are available with 720p display options.

On the one hand, there’s no doubt that you can fit a whole lot more on the screens. But there are a few problems. The first and foremost is that the text is so sharp that it’s hard for me to read from the  netbook for more than 20 or 30 minutes without getting a headache. I’ve tried adjusting the dpi from 96 to 125 and that helps a bit, as does using large fonts and adjusting the zoom level in Firefox and other web browsers. But these changes are often inconsistent throughout the user interface and just result in making the experience of using the T1028X even more disorienting.

There’s another problem too, and it’s one that I’ve also noticed with Intel Atom powered machines like the Asus Eee Top ET1602 with a 15.6 inch, 1366 x 768 pixel screen. The 1.66GHz Intel Atom N280 and 1.6GHz Intel Atom N270 processors have to work a lot harder to pump out graphics to higher resolution displays. So while Flash video from web sites like Hulu looks great in full screen on a netbook with a 1024 x 600 pixel display, it’s choppy on a 1366 x 768 pixel screen. This is a problem that could eventually be resolved by offloading some of the responsibility for processing Flash video to the graphics processor, but right now the integrated GMA 950 graphics in most netbooks isn’t optimized to work with Flash, and neither is the NVIDIA GeForce 9400M processor used in the NVIDIA ION platform.

I know some folks will feel differently about this, and never met an extra pixel they didn’t like. But I’m starting to think that 1366 x 768 pixel displays should only be used on laptops with 12 inch or larger screens. Even on those machines, that resolution is pretty darn sharp, but at least it’s not quite as blinding. It would be nice if there was an accepted resolution between 1024 x 600 and 1366 x 768 that netbook makers could comfortably use for 10 inch netbooks, but aside from the occasional 1280 x 800 or 1280 x 720 machine, I haven’t seen much.

48 replies on “How much difference does a high resolution display make?”