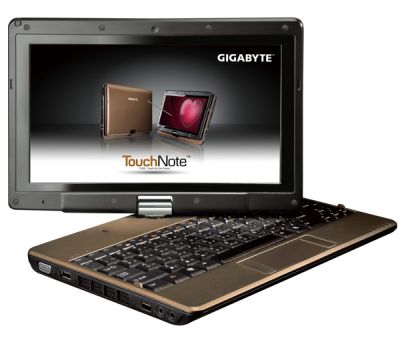 Looking for a touchscreen netbook with a 10 inch screen, 1366 x 768 pixel display, and 1.66GHz Intel Atom N280 CPU? Right now there’s pretty much only one choice: The Gigabyte TouchNote T1028X, which the company recently rolled out as an update to the original TouchNote T1028M (which has a lower resolution display).

While DigiTimes reports that a number of netbook makers plan to launch touchscreen models next year, right now the only companies with convertible tablet-style netbooks are Asus and Gigabyte. And Asus hasn’t released its 10 inch model yet, so the only option from that company is the Eee PC T91 which has an 8.9 inch, 1024 x 600 pixel display, a sluggish 1.33GHz Intel Atom Z520 CPU, and a small 16GB solid state disk.

The Gigabyte TouchNote has a larger screen, bigger keyboard, and more powerful processor. It also includes a 160GB hard drive and an ExpressCard slot. Unfortunately, all those extras come at a price. PC Micro Store is charging $698 for the Gigabyte TouchNote T1028X, while you can pick it up for about $20 less from Amazon

(although it still ships from PC Micro Store)

If you ask me, that effectively prices this laptop out of netbook territory. But for now, it’s still one of the cheapest 10 inch convertible touchscreen notebooks available.