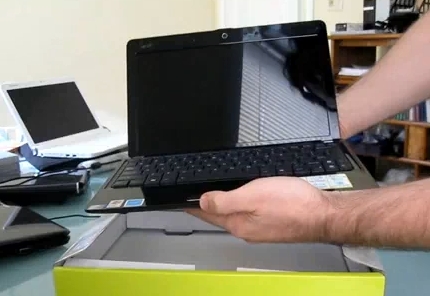 An Asus Eee PC 1101HA just showed up at Casa de Liliputing. I’ve only had a few moments with this 11.6 inch laptop, so I haven’t had a chance to put it through all the paces yet. But I am fairly impressed with the size and layout. It feels just a little bigger than the Asus Eee PC 1005HA, which has a 10.2 inch screen. But the Eee PC 1101HA packs a larger, higher resolution display.

The 1101HA also has a 1.33GHz Intel Atom Z520 processor, which is slower than the 1.66GHz Atom N280 CPU in the smaller netbooks from Asus. The Z520 processor does use less energy, and Asus claims that the Eee PC 1101HA can get up to 11 hours of battery life on a charge. That’s a claim I hope to put to the test over the next few days.

In the meantime, you can check out an unboxing video after the break. Sorry about the rather abrupt ending, but the camerawork was pretty shoddy at that point. I was trying to walk around the two netbooks but it turns out there are some maneuvers that shouldn’t be attempted with cheap digital cameras.