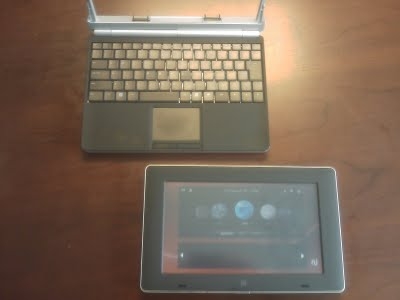 The Always Innovating Touch Book has begun shipping, and a small number of people have already managed to get their hands on this unique machine which is something of a cross between a netbook and a tablet-style UMPC. Stephen Feger got one today and has been posting his first impressions on Twitter. And jkkmobile has published a few photos, including the one you can see above.

There are a few things that make the Touch Book different from any other netbook on the market. First, the computer is primarily crammed into the 8.9 inch touchscreen display. If you don’t want a keyboard, you don’t have to buy one. You can pick up the tablet for $299. For $399 you get the tablet plus the base station which includes a keyboard and touchpad.

Second, the machine uses a TI OMAP3530 processor, which helps keep the power consumption down, but which isn’t going to win any awards for speed. Still, the Touch Book is significantly cheaper than the other touchscreen netbooks on the market today, including the Eee PC T91 and Gigabyte Touch Note T1028X, which go for $499 and $680 respectively.

Update: Feger and other users have begun posting more information and photos.

2 replies on “Always Innovating Touch Book in the wild”