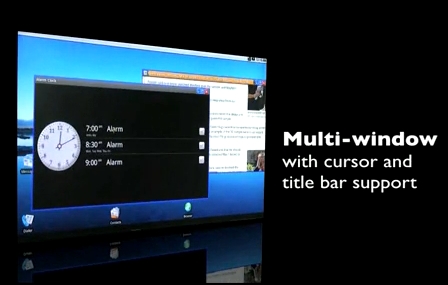 When computer makers started talking about using the Google Android operating system on netbooks earlier this year, I kind of laughed and moved on. After all, the OS was developed for cellphones with tiny touchscreens, not mini-laptops with higher resolution screens, keyboards, and touchpads. But software company ThunderSoft is making me think twice about Google Android’s viability in the netbook space. In a demo video posted on YouTube this week, you can see a computer running a tweaked version of Google Android that supports the following features:

Sure, these features are old hat on most desktop operating systems. But they’re kind of revolutionary for Google Android. Of course, Google has another operating system in mind for netbooks. The Google Chrome Operating System is expected to be available later this year or early next year, and it could make this whole Android-on-netbooks fad go away pretty quickly. But ThunderSoft’s solution actually makes Android look like it could be a halfway decent netbook OS, especially as an alternative to a full Linux distribution on a netbok with a low power ARM processor.

You can find the video after the break.