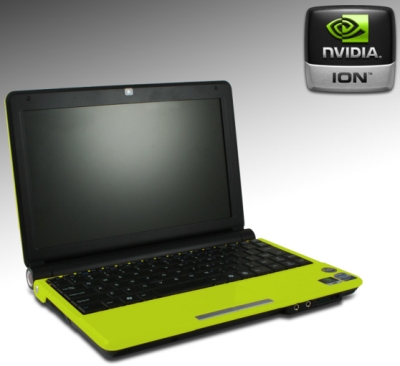 I love it when companies give their products self-explanatory names. Take Point of View’s new Mobii ION 230 netbook. Guess what kind of chipset it has? Yup, NVIDIA ION, which in this case pairs a 1.6GHz Intel Atom 230 processor with an NVIDIA graphics processor. The Atom 230 is basically the desktop version of the Intel Atom N270 CPU for netbooks, and no, I have no idea why Point of View would choose to use this particular processor in this 10.2 inch netbook.

The Mobii ION 230 also has an HDMI port, DirectX 10 and Shader Model 4.0 graphics, and enough oomph to display 1080p video… even though the screen resolution isn’t actually high enough for 720p video. Still, you should be able to handle some modern video games or play Blu-Ray or other HD videos without converting them to a lower quality format first. This is one of the first 10 inch netbooks I’ve seen to feature the NVIDIA ION platform.