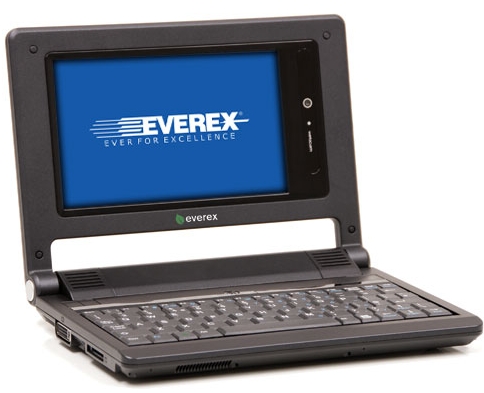 Everex was one of the first companies to offer a netbook in the US. When Everex introduced its first Cloudbook the only other low cost mini-laptop on the market was the Asus Eee PC 701. And a lot of people were excited about the Everex Cloudbook because it ran a version of Ubuntu Linux. But it also had a slow processor, cramped keyboard, and Ubuntu wasn’t optimized to run on the computer’s 7 inch, 800 x 480 pixel screen. In fact, some users couldn’t even get past the first setup dialog that showed up the first time they booted the computers, because some of the dialog boxes didn’t fit properly on the screen.

So when Laptop Magazine pointed out today that Everex USA has gone out of business,I wasn’t exactly that surprised or concerned. Still, the company should at least get a few points for trying ot do something different.

The Everex Taiwan and Japan pages appear to still be active, but it’s not clear whether the company, which had sold a number of cheap laptop and desktop PCs through big-box retailer Wal-Mart, will ever sell another computer in the US. You can still find a few 7″ Cloudbooks at Wal-Mart and other shops. But the $249 asking price is really far too high for this machine.