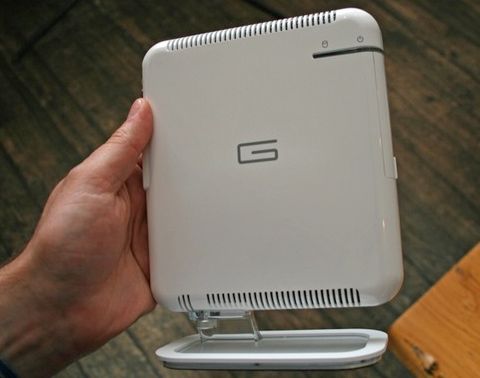 Emtec is planning to launch a tiny desktop computer powered by NVIDIA’s ION platform which bundles an Intel Atom processor with NVIDIA graphics. Emtec is the company behind the innovative (if a bit behind schedule) Gdium netbook with a Loongson CPU, Mandriva Linux, and a removable USB flash drive that functions as the computer’s main storage device.

The upcoming “G Box” nettop, spotted at a recent event by Pocket Lint, looks a bit more standard.It will have a 160GB hard drive, and run Windows XP, which probably means it will have 1GB of RAM. It has 6 USB ports, 4 on the back and 2 on th efront, an Ethernet adapter, mic and headphone jacks, and an Ethernet port. There’s no word on integrated WiFi, but that does seem to be all the rage on nettops these days, so I wouldn’t be surprised if his computer had 802.11b/g capabilities at the very least.

The netbook will sell for about £179 or $293 US. This model won’t have HDMI, but Pocket Lint reports that a pricier, HDMI-enabled version will be available as well.