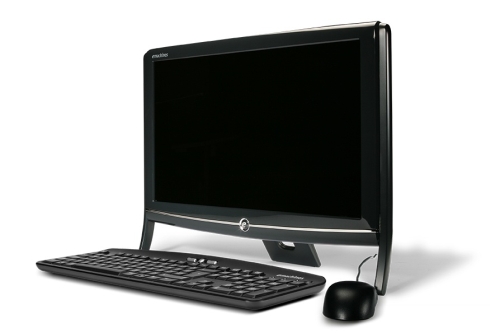 I think we need a new name for all-in-one PCs. Because there’s a whole new crop of these iMac-esque computer-in-a-monitor style desktops that are based on the same idea as netbooks. No, they’re not necessarily smaller than traditional all-in-ones. But they’re cheaper, use less power, and generally don’t provide the same kind of performance you would expect from a more expensive system. And while I’m cool with the thought that one day we’ll probably stop using the word “netbook” and just start referring to our little buddies as cheap, tiny laptops, I think it’d be handy to have a word to differentiate computers like the recently announced eMachines EZ1601-01 all-in-one desktop from higher end systems like the HP TouchSmart series or the iMac.

OK, now that I’ve got that out of my system, here’s what we know about the eMachines computer. It’s got an 18.5 inch LCD display (sorry, no touchscreen), a DVD burner, and 5 USB ports. Otherwise, the spec list reads like your pretty typical netbook: 1.6GHz Intel Atom N270 CPU, GMA 950 graphics, 1GB of RAM, 160GB hard drive, and Windows XP Home Edition.