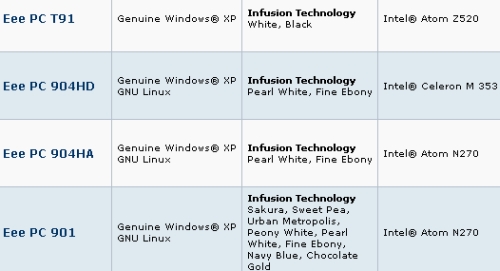 It’s been less than 2 years since Asus introduced the first Eee PC netbook. And boy has the company been busy ever since. I mean, I knew Asus had released a ton of netbooks including a few major new models and a ton of minor variations on earlier models, nothing says brand dilution like a chart showing 27 different Eee PC models released since November, 2007. Of course, Asus probably didn’t whip this chart up to confuse you, but rather to make it easier to spot the differences between the many models, but whoa nelly!

The sad thing is… this chart doesn’t’ actually include very model that Asus has released or demonstrated. For instance, I don’t’ see the Eee PC 1002HAE, Eee PC 1004DN, or Eee PC T101H, although to be fair, I haven’t heard anything about the T101H since January. It’s possible that Asus has decided not to release the 10 inch version of the Eee PC T91 after all.