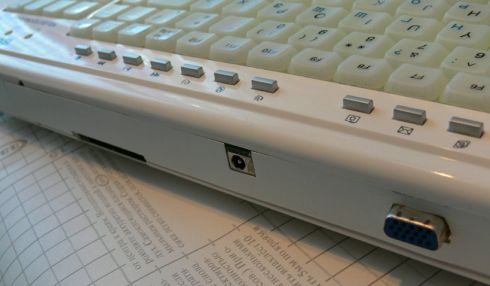 I’m starting to think Russia is breeding a new species of super-netbook hackers. All the coolest netbook-to-carputer hacks I’ve seen have come out of Russia. And now another Russian hacker has decided that rather than waiting for Asus to release it’s Eee Keyboard, he would build his own by cramming the guts of an Eee PC 900 into a Sven Multimedia EL 4002 keyboard.

The DIY Eee Keyboard may not have wireless HDMI, and it may not be as slim as the real thing. But it does pack a full computer inside a keyboard case, plus a VGA output, a few USB ports, and other goodies including headphone jacks and a built in mic. It’s probably more suited for use as a desktop PC than a home theater PC. But it’s still pretty awesome.

Update: The forum posting has been updated with additional photos of the DIY Eee Keyboard in action. If you haven’t checked out the post at Eee-PC.ru in a few days, you should definitely give it another look.

21 replies on “DIY Eee Keyboard from Russia with Love”