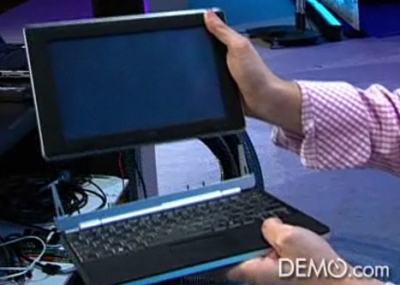 Always Innovating’s Touch Book is scheduled to begin shipping this month. This little computer is a combo netbook/tablet. But instead of folding the touchscreen display down over the keyboard for use in tablet mode as you would with most tablet computers, you can actually remove the screen from the keyboard and use it as a standalone device. Heck, you can even save $100 and purchase the display for $299 without the keyboard at all.

The device was first introduced at the DEMO conference a few months ago, where it made a bit of a splash. But for some reason nobody ever brought the DEMO demo video to my attention… until today. UMPC Portal tracked down a video of the presentation Always Innovating Made, showing that the Touch Book has a touch-friendly Linux-based OS, an accelerometer to adjust the screen when you rotate the machine, and 3D acceleration.

A few other things I learned:

The prototype was running the Fennec web browser, which is an early build of a mobile version of Firefox. But I wouldn’t be surprised if the final build ran a full version of Firefox. I already knew that the Touch Book featured a few internal USB ports. What I didn’t realize until I saw this video is just how much room there is on the inside of the case. You can literally take a USB flash drive, 3G adapter, or other dongle and just stick it into an internal port if you don’t expect to unplug it very often.