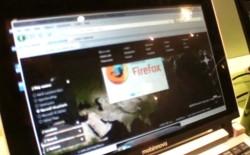 A few new details are coming about about NVIDIA’s Tegra platform for low cost netbooks. First, as expected, these things can handle HD video without using much electricity at all. The Tegra 600 platform can handle H.264 video at 720p resolutions, and the Tegra 650 can do 1080p. And as TechVideoBlog discovered, that doesn’t just go for videos stored on your hard drive. They’ve posted a demo video showing a Tegra-based netbook streaming HD video from the web.

But what about Flash? Well, we have more mixed results there. The NVIDIA GPU certainly helps render graphics generally, and the demo unit handled Flash heavy sites like Flash Earth quite well. No word on how it handles full screen Flash video from sites like Hulu or YouTube. I really wish more people would adopt a Hulu test as a de facto standard, because it’s the one site that I’ve found Intel Atom processors struggle with once you have a screen larger than 1024 x 600 pixels. Of course, the Computex trade show is in Taiwan, while Hulu doesn’t stream video outside of the US, but a demonstration of HD Flash video streaming from YouTube would have been nice.

Anyway, the other impressive thing from the TechVideoBlog video is that the Mobinnova élan demo unit is running Firefox 3.5. On Windows CE. Most Tegra-based netbooks are going to be saddled with 512MB of RAM or less, which means they’re going to struggle to display more than 3-4 Firefox tabs at a time. But I’m thinking I might not mind dealing with the limitations of a Windows CE device if it can run Firefox. Incidentally, yesterday Acer was showing off a netbook running Firefox on Google Android.

You can check out the complete video from TechVideoBlog after the break.