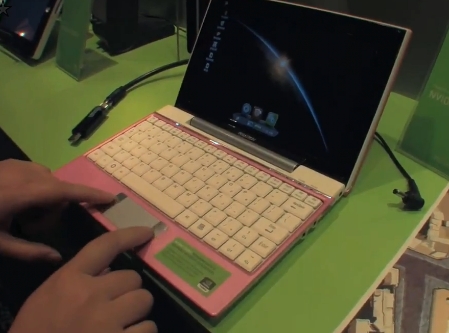 The Pegatron Vivid mini-laptop has three things that set apart from most netbooks available today. First, it’s based on NVIDIA’s Tegra chipset which bundles an ARM-based CPU with NVIDIA graphics to deliver support for 1080p video playback through HDMI while consuming less power than most Intel Atom based netbooks. Second, the Pegatron Vivid has a built in battery which isn’t easily user replaceable. And third, there are shortcut keys atop the keyboard for Yahoo!, Google, MSN, and Skype.

While I’m a fan of throwing a few user customizable keys onto a laptop if there’s room for them, these buttons seem like odd choices. Because really, if you’re a Google user, how often are you goign to hit that Yahoo! button? Hopefully you can reassign the keys.

The mini-laptop also has 2 USB ports, an SD card reader, and a non-reflective matte display. It also has a rather tiny looking touchpad with buttons on the left and right sides. You can see more in the video below that Netbook News shot at Computex.