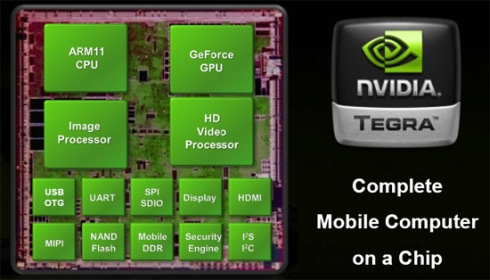 NVIDIA is expanding its Tegra platform, originally designed for touchscreen MIDs, or Mobile Internet Devices, to include netbook-style mini-laptops. Tegra combines an ARM-based processor with an NVIDIA graphics processor to provide high quality graphics on a mobile device while using relatively little power. NVIDIA first dropped a hint that it was working on Tegra netbooks back in April when the company demonstrated an HP Mini 1000 that had been retooled to use the Tegra platform.

At launch NVIDIA expects these Tegra based netbooks to run Windows CE, which is similar to the Windows Mobile operating system found on cellphones. That’s because Windows XP, Vista, and 7 won’t run on an ARM processor, but Windows CE will. Ultimately, NVIDIA expects to support Google Android as well.

NVIDIA is targeting the Tegra netbook platform at wireless carriers. You probably won’t see machines using this processor combo coming from HP, Dell, or other big name PC makers. And that makes sense, because I think telecoms will be able to market the netbooks as sort of an extended cellphone-like device that doesn’t have the capabilities of a full computer. If you were to pick one up from Best Buy as a standalone computer, you might find yourself wondering why it doesn’t run Firefox, Office, or other software you’re used to running on a computer. But if it comes from the phone company, you’re more likely to be happy so long as it lets you connect to the internet, check your email, update your social networks, and watch web video.