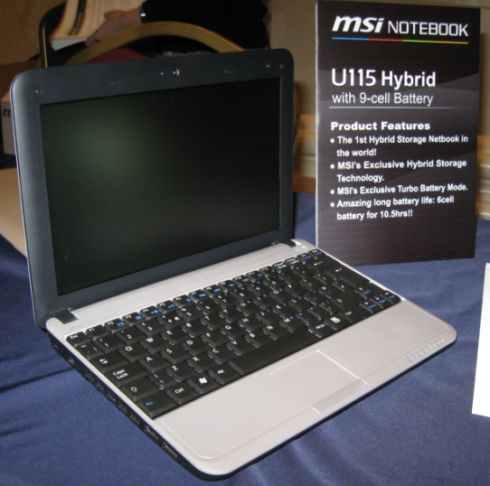 MSI is just starting to sell the Wind U115 netbook in some parts of the world, but it looks like the company is preparing to phase this model out soon. In fact, if you want to get your hands on this netbook with excellent battery life and a combo hard drive/solid state disk storage system, you’ll probably want to snatch one up as soon as you can find one because they might be hard to come by as early as July or August.

Why would a company stop production of a brand new model so quickly? In a word: Microsoft. The software company allows netbook makers to purchase low cost licenses for Windows XP to ship with low priced, low power mini-laptops. But Microsoft recently decided that one of those restrictions would be that a netbook could have a hard drive or SSD, but not both. Right now, that restriction only affects one netbook: The MSI Wind U115.

In other words, MSI either has to pay a higher price for Windows XP licenses for this machine than for other netbooks, or the company may have reached a special agreement with Microsoft. Either way, hot on the heels of news that MSI would continue selling the Wind U115 in Germany through October comes a report that MSI could stop production by the end of July at Microsoft’s request.

My guess is that MSI had already begun producing this netbook and wants to at least recoup some of its R&D costs on the machine before phasing it out. But it would have been swell of Microsoft to mention the restriction to MSI before the company developed a mini-laptop with a hybrid storage solution.