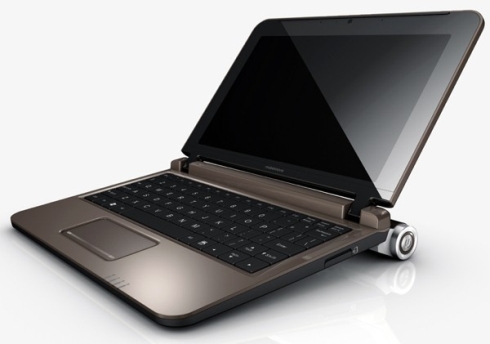 While you might not really expect much from a mini-laptop running Windows CE, the Mobinnova élan is definitely raising some eyebrows at Computex. That’s because this little 8.9 inch Smartbook is rocking the NVIDIA Tegra platform under the hood. That means it bundles an ARM-based processor with an NVIDIA graphics processor to deliver smooth playback of 720p or 1080p video.

Oh yeah, and you should also be able to get 5 to 10 hours of battery life while playing HD video continuously. The computer will run even longer if you’re just using it to surf the web, although the computer seems to have a ridiculously large battery, although Laptop Magazine’s Joanna Stern says it’s just a 3 cell battery.

Now, the funny thing is that the Mobinnova élan doesn’t have an HD screen. But the little laptop shows the power of the Tegra platform. And at the very least it means you can watch high definition videos without converting them into a lower resolution format first.

The smartbook is running Windows CE 6, but NVIDIA has customized the user interface with its own slick looking program launcher. Unfortunately I think Windows CE netbooks are going to continue to be at a disadvantage until someone ports a full web browser like Google Chrome, Firefox, or Safari to run on the platform. Because while Skyfire and Fennec show promise, when you give someone a device with a nearly full sized screen and keyboard, I don’t think they’re going to want to use a mobile browser designed for cellphones.

You can check out a short video of the Mobinnova élan in action after the break, courtesy of Engadget.