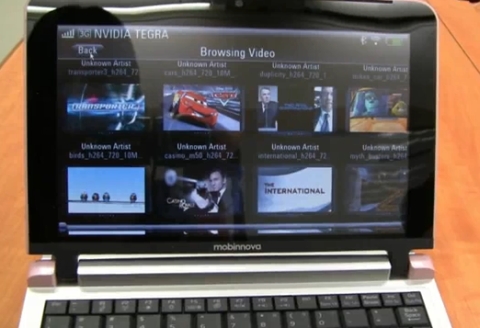 First introduced at Computex earlier this month, the Mobinnova élan is a mini-laptop powered by NVIDIA’s Tegra platform which bundles an ARM CPU with NVIDIA Graphics to enable HD and 3D video performance on an extremely low power machine. This particular model is running Windows CE, but you’d almost never know it because the device has a custom 3D user interface that rests on top of Windows CE. It can also run a full version of Firefox and has full featured audio and video players.

The folks at Netbook News shot a video overview of the UI, which lets you play movies, view photos, and perform other tasks without using the default Windows CE tools. The UI takes advantage of the NVIDIA GPU and includes high quality 3D animations. The computer can handle playback of 1080p video and has an HDMI output for pumping HD video to an external display. I’m not 100% sure, but I think you might be limited to 720p video output. It should be able to handle 6 hours of video playback on battery power.

Mobinnova calls this little laptop a “viewbook” because of its entertainment focus. So you can add that to your list of jargon alongside netbook and smartbook.

You can check out the video of the Mobinnova élan after the break.