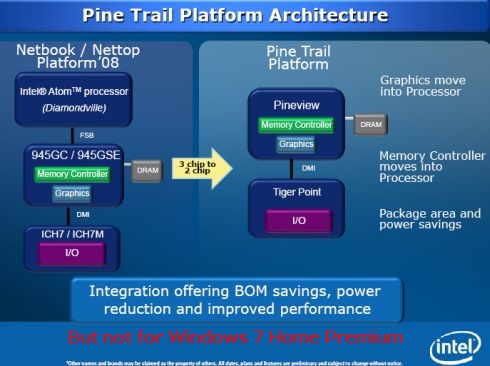 Microsoft has made a big point of letting the world now that every version of Windows 7 will run smoothly on low powered computers like netbooks. That means you can run Windows 7 Starter, Home Premium, Ultimate, or Enterprise on a netbook if you want. You’ll just have to pony up a bit more cash if you want to run anything other than Windows 7 Starter Edition. But at least one Intel executive sees things differently.

APC Magazine spoke with Intel vice president Mooly Eden who said that the company doesn’t think Windows 7 Home Premium is the right solution for netbooks, and so the company won’t be validating its upcoming Intel Atom Pineview processor for Home Premium.

So how important is this whole “validation” thing? It’s not going to stop any company or consumer from installing Windows 7 Home Premium on a netbook with a Pineview processor. But Intel won’t promise that the experience will be bug-free.

My guess is if the vast majority of PC makers decide to load up their Windows netbooks with Windows 7 Home Premium instead of Starter Edition, Intel may change its tune. But for now, it looks like those machines could be unvalidated.