Edward Bullister has a great idea for a tiny netbook-like device that you can fold up and put in your pocket, or unfold to use with a full sized keyboard and display. Unfortunately, right now about all he has is an idea. Bullister says he has a business plan, and he’s put together a nice little demo video, which I posted the other day. But today I got a chance to check out his non-working prototype, and there’s clearly a lot of work to be done. 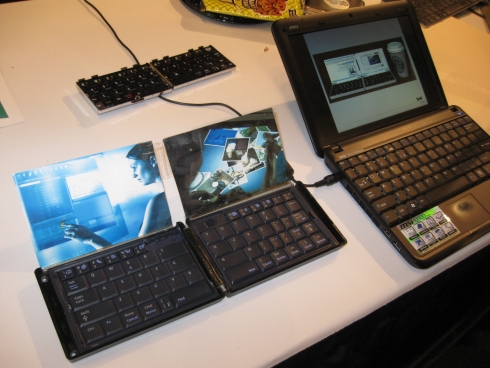 Basically, the prototype is a portable keyboard that’s been cut in half and placed in a plastic case with a hinge. A few pieces of glass with paper cut-outs of web pages and other graphics go where the screens would go.

Bullister says he’s been talking to Intel and he’s working to find hardware manufacturers interested in building actual products based on his device. But so far he’s not ready to make any announcements.

The concept is pretty cool. In order to fold up, the computer would require two separate displays. The prototype doesn’t have any kind of pointing device, but Bullister says he plans to add one, although a touchscreen could also work. He imagines a finished product with an Intel Atom Moorestown-based CPU could sell for around $600. He thinks the price point would be higher than the typical netbook because of the dual screens and other components.

You can check out a short video with Bullister and his Dragonfly mockup after the break. Please excuse the horrible camera work. I come from radio, not TV, okay?