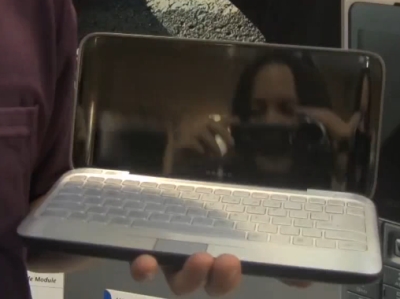 Under the hood, the computer will feature either an 800MHz OMAP3 3440 or 1GHz OMAP 3450 processor, which means the T800 ain’t going to run Windows XP anytime soon. Instead it will come with Google Android. it also has an 8.1 inch display, 512MB of RAM, a 2.5 inch hard disk or solid state disk, and 2 internal mini-PCIe slots for wireless connectivity. The computer also has 2 USB ports, a 4-in-1 card reader, and an optional 0.3 or 1.3MP webcam.

No word on pricing, but with those specs I’m guessing it’ll cost at least a few bucks less than the Sony Vaio P. You probably won’t see this machine hitting store shelves under the ECS brand name anytime soon. Instead, it’s likely that ECS will market it at telecoms interested in putting their own brand names on the hardware and maybe even the software and selling it to consumers bundled with a wireless broadband contract.

Sascha from Netbook News.de shot a little video with a non-working prototype. Check it out after the break.