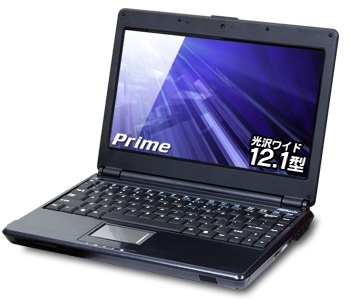 One of the defining characteristics of a netbook is that they’re low power devices that generally don’t offer the kind of graphics and processing performance you’d find in higher priced computers. But not all netbook and nettop parts are created equal. And DosPara has crammed pretty much all of the most powerful netbook/nettop class components you can find into a new mini-laptop.

Now, some folks are going to point out that the DosPara Pime Note Cresion NA might not really be a netbook, thanks to its 12.1 inch display. it also weighs 1.92kg or about 4.2 pounds. But like most netbooks, this little laptop has an Intel Atom processor. What sets it apart from most netbooks is the fact that it uses the dual core Atom 330 CPU, which usually only shows up in desktops.

DosPara has also crammed an NVIDIA ION chipset into the notebook which should give it better graphics performance than most netbooks. The laptop has an HDMI port, supports 2GB of RAM, a 320GB hard drive, and 802.11b/g/n WiFi as well as Bluetooth 2.1. The screen displays 1366 x 768 pixels, and the laptop will sell for the equivalent of about $609 without an operating system.

While I’d rather see a slightly smaller and lighter version of this laptop, it is nice to see that at least one company is willing to throw an Atom 330 dual core CPU into a laptop case. Unfortunately, it probably requires a bit more cooling than the single core version of the chip, which could require a larger and noisier fan.