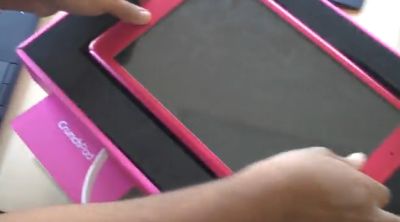 We already knew that TechCrunch founder Michael Arrington’s CrunchPad internet tablet was almost ready for the group to show off in the flesh, well you know, if computers had flesh. Now the folks at CrunchPad Fans spotted a YouTube video showing what the near-final retail packaging looks like, as well as a nearly finalized prototype of the tablet itself.

The machine doesn’t turn on in the video, so you can’t see it boot up, connect to the internet, or do much of anything else useful. But you can see how thin it is. You can also see that the device is pretty much all screen, with no keyboard or even much of a bezel around the display.

You can check out the video after the break. And you might want to keep an eye on Loic Lemeur’s YouTube channel, since it looks like this unboxing was just the prelude to a longer demo.

Update: It appears Michael Arrington was not amused by the video. It’s been removed from YouTube, and Arrington points out that while the packaging may have been close to final, the prototype was not.

3 replies on “CrunchPad prototype unboxed, and that’s about all – Video”