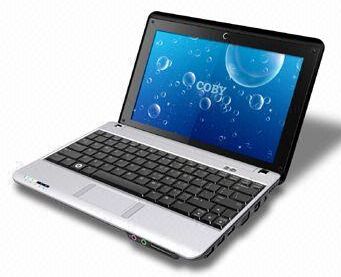 Electronics company Coby first showed off a line of cheap netbooks at CES in January. The company is probbaly best known for selling cheap items including MP3 players, DVD players, and digital picture frames that might not exactly live up to the high quality standards of companies like Sony or Apple. But they’re darned cheap.

Anyway, I haven’t heard a peep about Coby’s netbook plans since January. But Cloned in China reports that the company was showing its netbooks again at Computex in Taipei earlier this month. Coby had half a dozen different models on display at CES, but apparently by Computex the lineup had been narrowed down to a model called the NB PC1022 with a 10 inch display, 1.6GHz Intel Atom N270 CPU, 1GB of RAM, 160GB HDD, and 1.3MP webcam.

Even more interesting is the fact that Coby has apparently been selling this model in South America, Korea, and Indonesia for between $220 and $240 since March. I hadn’t heard anything about that, but I did a little digging and did find a product page for the netbook, although it doesn’t look like you can place web orders justyet.