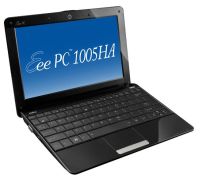 The Asus Eee PC 1005HA netbook features an excellent balance of size and battery life. At a glance, the netbook looks virtually identical to the Eee PC 1008HA, but it’s both thicker and heavier. The added depth gives the 1005HA room for a full sized VGA port, and a high capacity removable battery, both of which are missing from the 1008HA. Yet the Eee PC 1005HA is still thinner and lighter than its predecessor, the Eee PC 1000HE which Asus will soon phase out.

But does the Eee PC 1005HA offer enough advantages over the 1000HE for existing users to upgrade? Read on to find out.

The Asus Eee PC 1005HA is part of the company’s new “Seashell” product line, with a design that Asus says is inspired by seashells. When the lid is closed, the computer is wider at the back than in the front.

At its thickest point, the netbook measures 1.4 inches thick, but it’s much slimmer near the front. Unlike the Eee PC 1000H and 1000HE, though, the netbook features a hinge that lets the screen slide down behind the keyboard when you open it, giving the netbook the illusion of being smaller than earlier 10 inch Eee PC models. 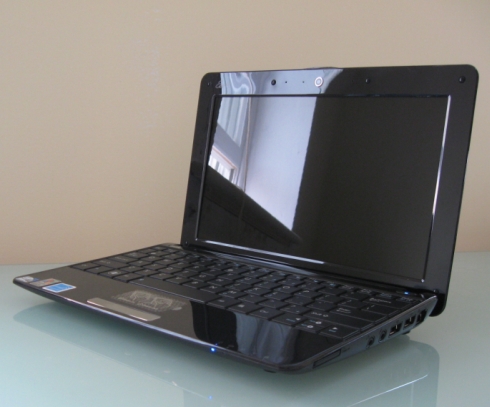 Aside from those features, the Eee PC 1005HA looks almost exactly like the 1008HA. Both netbooks feature a glossy display as well as a glossy lid and palm rest area which look nice at first, but which attract fingerprints like nobody’s business. 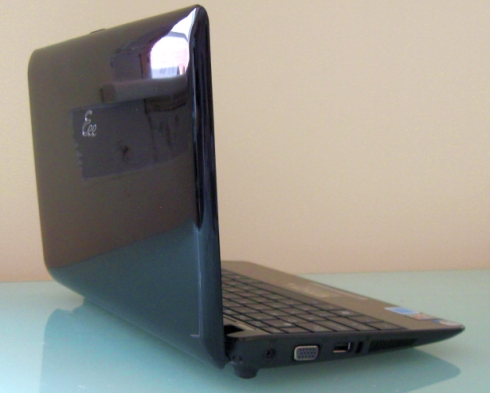 While the Eee PC 1008HA has plastic covers for ports on the side of the netbook to give the laptop a cleaner look, the Eee PC 1005HA lacks these covers. That can be a good or bad thing depending on how you look at it. On the one hand, it means the ports will be more noticeable, on the other you don’t have to worry about those plastic bits breaking off.

Without a doubt, this netbook’s best feature is its battery. First, unlike the Asus Eee PC 1008HA, the 1005HA battery is removable. That means you can purchase a spare and swap batteries if you need to. Or if your battery dies you can replace it without sending the netbook back to Asus for expensive surgery. 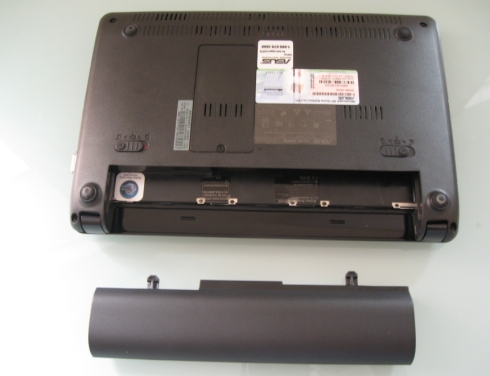 But I’m guessing that most users won’t need an extended battery. That’s because the Eee PC 1005HA runs for a ridiculously long time on a single charge. With WiFi on and the screen set to half brightness, I was able to get 8 hours of more of battery life.

I wrote part of this review on an airplane with the WiFi turned off, and the Windows power meter told me that I could get as much as 12 hours of run time, although I haven’t put that to the test (I don’t typically have much use for a netbook that’s not connected to the net).

I ran the same Battery Eater Pro test on the Eee PC 1005HA that I’ve used in a number of other reviews. In classic mode, the netbook lasted about 6 hours and 15 minutes. That’s about ten minutes better than the Eee PC 1000HE, which lasted 6 hours and 4 minutes in the same test. The test is designed to put a constant strain on the system, so I’d imagine it’s safe to say that you could watch about 5 or 6 hours of standard definition video before the battery would give out on you. 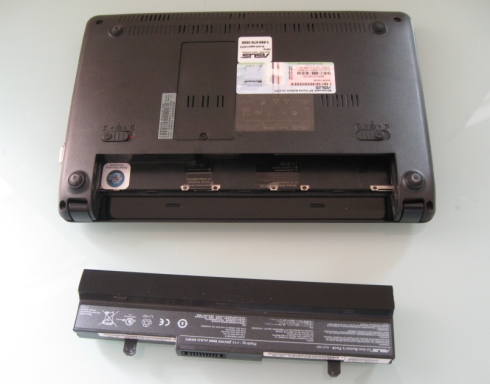 The Eee PC 1005HA will be available with two different battery options. The version I tested has a 6 cell, 63WHr battery which Asus describes as a 10.5 hour battery. There will also be a 6 cell,  48Whr battery which Asus says is good for 8 hours. My guess is that will translate to about 6 or 7 hours in real world conditions, which is still pretty good for a 2.8 pound netbook.

Asus also says there will be a 3 cell, 23Whr battery option will probably provide about half the run time, but should reduce the size and weight of the netbook.


The Eee PC 1005HA keyboard is nearly identical to the keyboard on the Eee PC 1008HA. It stretches nearly from one end of the netbook to the other, making good use of the limited space available. While it’s not exactly a full sized keyboard, it does feature nice large keys that are comfortable to type on, and two reasonably large shift keys on each side of the netbook. 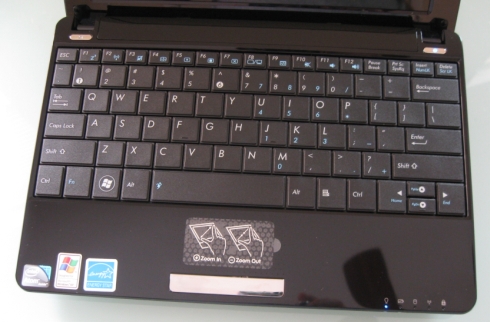 In order to accommodate the large shift key on the right side of the keyboard, Asus shrunk the PgUp and PgDn keys and mushed them together with the Home and End keys. These keys also double as the computer’s arrow keys. I’m not a huge fan of the arrow key layout, but I got used to it after a few days.

The arrow keys aren’t the only dual-purpose buttons on the keyboard. Pressing the Fn key while hitting the top row of keys can toggle the wireless, put the computer to sleep, brighten, dim or turn off the display or audio, or launch the Windows task manager. Hitting the Fn key with the spacebar toggles the Asus Super Hybrid Engine which lets you underclock or overclock the PC’s processor when you want conserve power or boost performance.

The touchpad is reasonably wide, and sits flush with the computer’s palm wrest. You can detect the edges of the touchpad easily without looking because it has a textured/dimpled surface. I could be wrong, but I feel like the dimples aren’t quite as large as those on the Eee PC 1008HA, which makes this touchpad a little easier to use. 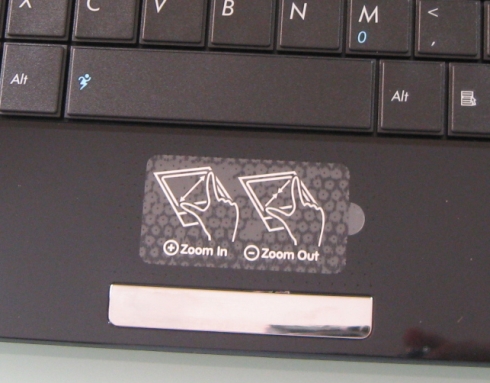 Above the keyboard there are two buttons: a power button, and a button that lets you turn off the touchpad if you don’t want to accidentally bump into it while using a mouse. The user customizable buttons for launching applications that were found on early Eee PC models are nowhere to be found.


The netbook has a 10.1 inch, 1024 x 600 pixel glossy display. It’s bright and displays colors well indoors, but looks like a mirror when used in bright sunlight. While many users prefer matte screens for outdoor use, the truth is if you mostly expect to use your netbook indoors, the glossy display shouldn’t be much of a problem. 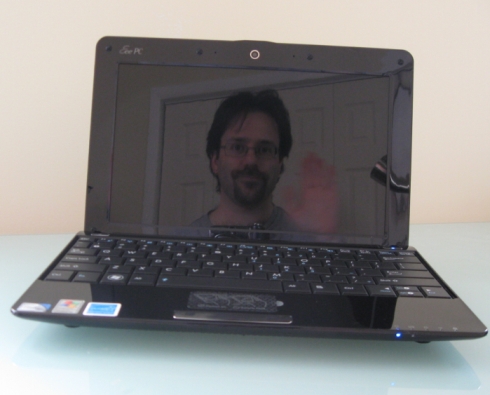 While the Eee PC 1005HA uses the same Intel GMA 950 integrated graphics as many other netbooks, this model uses the newer Intel Atom N280 CPU which has a slightly higher clock speed and bus speed than the Intel Atom N270 CPU used in the Eee PC 1000H and many other netbooks that were released in 2008. This gives it a little bit of an edge when it comes to playing HD video. But the truth of the matter is that while the Eee PC 1005HA can handle 720p video in a number of formats, it will choke up on 1080p video.

Web video from sites including Hulu and YouTube plays back smoothly on this machine.

Like many other netbooks the Eee PC 1005HA runs Windows XP Home Edition, has 1GB of RAM, and a 160GB hard drive. It has a 1.66GHz Intel Atom N280 CPU and the Intel Mobile 945GSE chipset with GMA 950 integrated graphics. It’s not exactly a speed demon, but thanks to the Atom’s decent performance and hyperthreading support, you should have no problem performing light weight computing tasks like web browsing, watching videos, or using office software.

The netbook also handles multitasking reasonably well and I was able to surf the web with several browser tabs open while listening to music and editing photos without any noticable slowdown.

The Eee PC 1005HA has a rather noisy fan, which does help keep the underside of the computer from getting noticably warm. But it can be fairly noticable if you’re using the netbook in a quiet setting.

Asus has a handful of tools that it’s been packing onto Eee PC netbooks for the past year or so, including the Super Hybrid Engine which lets you overclock or underclock the CPU and the Eee Tray utility which lets you adjust the screen resolution and enable or disable various wireless options with just a click.

But Asus has also added some of its newer Eee PC applications, including: 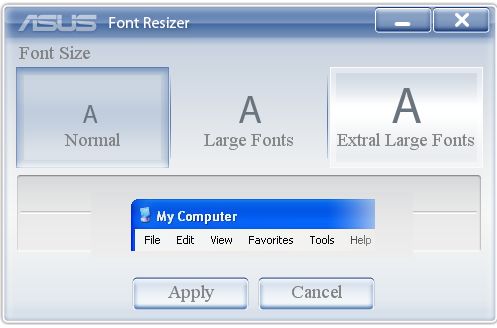 I’m guessing that the inclusion of Microsoft applications is part of a deal with Microsoft that may help Asus keep the price of this model down. Of course, if you’d rather use StarOffice, OpenOffice, or another office suite, you can always uninstall or just ignore Works and Office 2007.

The Asus Eee PC 1005HA isn’t the thinnest or lightest netbook around. But it is has a few features you won’t find on the ultrathin Eee PC 1008HA, including a removable battery and full sized VGA port. I’m also glad to be rid of the bright blue LED in the back of the Eee PC 1008HA, which was a personal pet peeve. 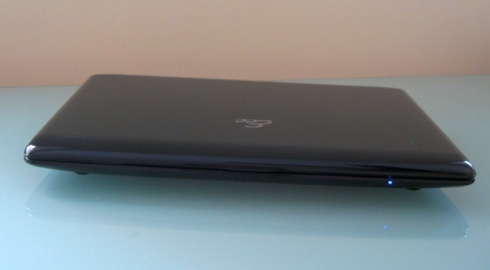 The Eee PC 1005HA is also cheaper than the 1008HA, with a starting price of around $389. And it’s thinner and lighter than the Eee PC 1000HE which it’s designed to replace. It also replaces the 1000HE’s matte display with a glossy, glare-reflecting screen. But if you can look past that, the Eee PC 1005HA has a decent keyboard and touchpad, average performance, and one of the best batteries I’ve seen on a netbook to date, which makes the 1005HA a welcome addition to the Eee PC family.

I’m not sure there are enough new features to warrant upgrading from an Eee PC 1000HE, but if you’re in the market for a new machine the Eee PC 1005HA is certainly worth checking out.

And you can find more images below (click the thumbnails to see larger versions), or check out my gallery comparing the Eee PC 1005HA and the Eee PC 1000H, which was the first 10 inch netbook from Asus.