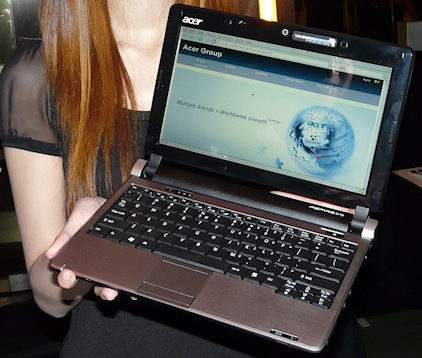 Well, that happened a little sooner than I’d anticipated. I’ve been a bit skeptical of Google Android’s viability as a netbook platform, because I contend that people expect more from a netbook than they do from a cellphone. While stripped down mobile browsers may be good enough for Blackberry, iPhone, Windows Mobile, or Symbian phones, if you give someone a larger screen and keyboard I think they’re going to expect Firefox or a similarly full featured web browser. And today Acer showed that you can run what looks like a full version of Firefox on a Google Android netbook. Color me surprised.

Yesterday Acer announced that the company would bring an Android powered netbook to market before the end of the year. While Acer isn’t ready to show that machine just yet, the company does have an Acer Aspire One D250 running Android on display at Computex. It boots in about 18 seconds, shuts down in just 1 second, and appears to be running Firefox.

I haven’t heard anything about a Firefox port for Android yet. As far as I know, even Mozilla’s mobile browser, Fennec, doesn’t officially support Android yet. But it certainly looks like somebody is working on a port. And if Firefox can run at a reasonable speed and supports Flash video and other rich media content, then I’m starting to think there may be something to this whole Google Android powered netbook craze.