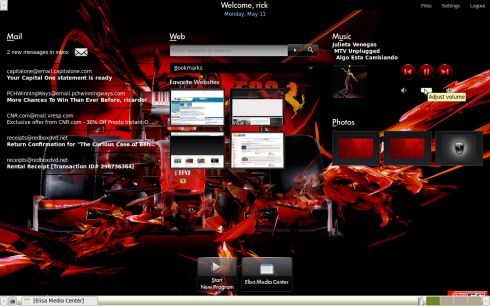 The HP Mini 1000 Mi Edition runs a slightly modified version of Ubuntu Linux. But what really makes the operating system stand out is the custom harbour launcher application that HP uses to make the computer feel more like an internet appliance than a computer running an operating system that would be unfamiliar to most users. You can read my review of the HP Mini 1000 Mi Edition for more details, but in a nutshell, the user interface makes it easy to access the web browser, web search, and a few bookmarks as well as email messages and media files from the home screen.

But if you’re not too keen on the default theme and background, it turns out it’s possible to change the theme. The theme that ships with the Mi Edition netbook is called Glassy-Bleu. One user who installed the harbour-launcher application on a full sized HP notebook says he mixed some of the information from the Glassy-Bleu theme with another theme called Aquadreams and then added his own desktop background to create his own custom theme.

Has anyone else tried this? Let us know what you think in the comments.