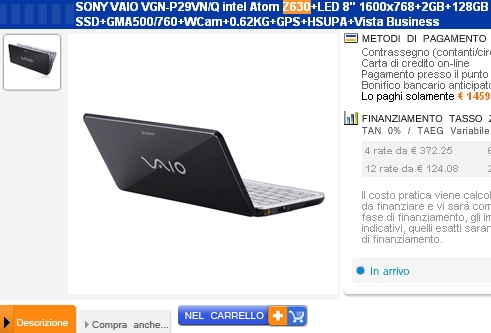 Intel has released a number of versions of its low power Intel Atom processor over least year or so. But so far I haven’t seen one called the Intel Atom Z630. But in a product listing for a new version of the Sony Vaio P mini-notebook, Italian retailer Computer City HW claims the ultraportable has an Intel Atom Z630 CPU.

There’s no word on what differentiates the Z630 processor from the Intel Atom Z530 CPU that is currently found in mini-laptops ranging from the Sony Vaio P to the Dell Inspiron Mini 10. But Notebook Italia speculates that the Atom Z630 could be a dual core version of the Z530. After all, the dual core version of Intel’s Atom 230 desktop CPU is the Atom 330. And if you add 100 to 530, you get 630.

Of course, this could also just be a mixup, and Computer City HW might have meant to write Z530 all along.