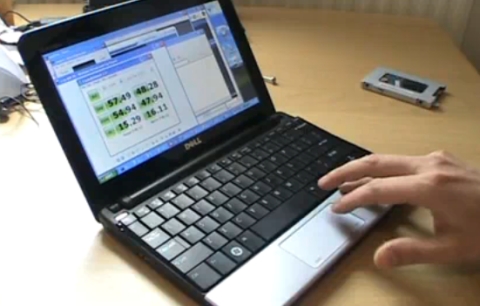 Netbooks are small and affordable. And in order to make a laptop both of those things, computer makers typically build netbooks out of cheaper parts. For example, while a number of netbooks come with solid state disks, they’re not generally in the same class as the high end SSDs you’d find in more expensive laptop or desktop computers.

Netbook SSDs do have a few advantages over hard drives. They usually use less energy than a hard drive, and there are no moving parts to break. But they typically store 32GB of information or less and offer read and write speeds that are no better than those you’ll find on a 5400rpm hard drive.

But if you’re willing to pay a bit extra to upgrade your SSD, you can get much better performance. Jkkmobile recently tested RunCore’s new Pro IV 2.5″ SATA SSD line. These solid state disks range from about $150 for a 32GB SSD to $890 for a 256GB SSD. And they’re fast. The cheapest models offer read speeds up to 215MB/s and write speeds up to 150MB/s, while the higher end SSDs can achieve read speeds of up to 240MB/s and write speeds of up to 185MB/s.

What really matters is real world performance. And jkkmobile shot a little video to show just how responsive his Dell Inspiron Mini 10 was after upgrading the storage to a RunCore Pro IV SSD. You can check out the video after the break.