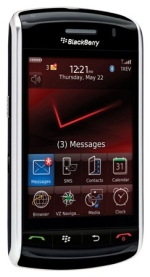 While it may seem like everyone and their kid brother is coming out with a netbook these days, there are a few companies that continue to insist that they’d rather focus on the areas where they’re most competent. Case in point: Research in Motion, makers of the popular BlackBerry smartphones. While BlackBerry devices have been blurring the lines between computers and phones for years, RIM co-CEO Jim Balsillie says the company has no plans to build a larger, netbook-like device.

Balsillie says the company is focused on devices with all-day batteries that can be held up to your ear or clipped on a belt. In other words, unless someone slaps a folding screen and keyboard on a netbook so that it can be squashed down to the size of a cellphone, mini-laptops just don’t fit the bill. That’s not to say that future BlackBerry devices won’t continue to add features that you currently find in netbooks like powerful web browsers and the ability to view rich media content. But Balsillie says that’s what accessories like Bluetooth keyboards or external displays are for.

I think this decision makes a lot of sense, but not for the reasons that Balsillie cites. He claims that consumers don’t really want all the bells and whistles that come with larger clamshell devices. What they want is small, pcoketable devices like smartphones.

I think they want both. Some people are going to be in the market for a smartphone and a cheap ultraportable laptop, which can each be used in different circumstances. And some are going to find that one suits their needs better than the other. I personally have a tiny candy bar-style cellphone with almost no special features (unless you count the fact that you can use the LED as a flashlight), because I find that I’m rarely away from a WiFi connection long enough to justify paying for a monthly data plan. So I carry a netbook around with me instead of a Smartphone. But I also keep an old Dell Axim PDA in my pocket in case I need to jot down some notes, check my calendar, or perform other simple tasks when I don’t have time to pull a computer out of my bag.

But I also don’t think it makes sense for companies that have expertise in one area (smartphones) to jump into a new area (netbooks) just because they’re hot. If you don’t have something new to bring to the table, there’s no reason to sit down at it. I also don’t see a lot of advantages to running the BlackBerry OS on a netbook instead of Windows, Linux, or even Google Android.

3 replies on “RIM CEO: Don’t expect a netbook from us”