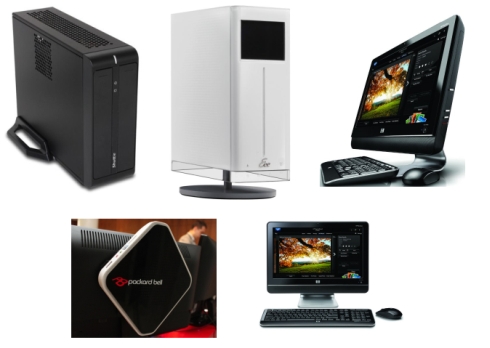 Computex is just around the corner, and that means a ton of computer makers are getting ready to either unveil new machines or launch previously announced products. One of the hottest categories right now appears to be nettops, or small, low power desktop computers that use many of the same components found in netbooks. Here are a few news items about upcoming machines:

The Shuttle XS29 series of nettop computers feature a VIA Nano processor and VX800 media processor. The nettops have VGa and DVI ports, and 4 USB 2.0 ports. They uses 50 watts or less, and can handle up to 4GB of RAM, a SATA hard drive or SSD. The X29 uses a Nano L series processor, while the XS29F uses a Nano U series CPU which runs slower, but which also uses less power allowing the XS29F to run virtually silently without a fan.

Both nettops should be on display at Computex.

Asus first showed of a network attached storage device as part of its Eee PC family at CES in January. The Eee NAS made another appearance at CeBIT in March, and word on the street is that Asus will be showing it off once more at Computex. But the exciting part is that Asus is reportedly planning to start shipping this network attached storage device with a built in touchscreen display in June.

If the Packard Bell iMax Mini looks familiar, that’s because it’s pretty much an Acer AspireRevo with the Packard Bell name slapped on it. And since Acer owns Packard Bell, that doesn’t really mean much. But umm… it comes in black?

Like the AspireRevo, the iMax Mini will be based on the NVIDIA ION platform, combining a 1.6GHz Intel Atom N270 CPU with an NVIDIA GeForce 9300M processor. It will have HDMI and VGA ports, 6 USB ports, 2GB of RAM, and a 250GB hard drive.

Packard Bell, a subsidiary of Acer, has been given the opportunity to create their own rendition of the Acer AspireRevo nettop, the iMax mini. Not much is known about the iMax mini at the moment, but it will have an Atom N230 and will contain the ION platform. Other specs that have been released are: 2GB of RAM, 250 GB HDD, 6 USB ports, an HDMI port, and a VGA port. It will also come with that snazzy gaming pad that some of the AspireRevos have. Packard Bell is aiming their iMax mini as a direct competitor to the Nintendo Wii, but with the added benefits of a traditional PC. The price has been said to start at £249, and that’s about all we know. Details will be updated as they come in.

When HP announced the new HP Mini 110 and 1101 netbooks yesterday, the company also dropped a bit of info about another machine: an all-in-one desktop called the HP MS200. While it’s not technically a nettop, it’s a pretty interesting entry in the all-in-one space. Asus, MSI, Shuttle, Lenovo, and others have all introduced all-in-one desktops powered by Intel Atom processors over the last few months, some with touchscreen interfaces.

HP has been offering touchscreen all-in-ones with Intel Core 2 Duo processors for a while as part of its TouchSmart series. The MS200 is something new. It lacks a touchscreen and uses an AMD Athlon 64 X2 processor. The main thing the MS200 has going for it that the TouchSmart all-in-ones don’t is a low price. The HP MS200 will have a starting price of around $599. Unfortunately it will only be available in China at launch.

One reply on “Nettop updates from Shuttle, HP, Asus, and Packard Bell”